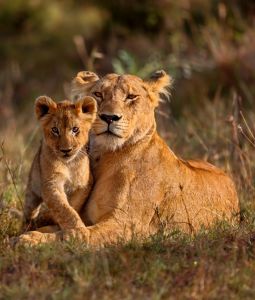 Depart Tarangire National Park and drive to Lake Manyara. On your arrival at the park, carry out a game viewing and around the lake which is known for its big population of Flamingos. In the evening, drive to the overnight campsite which is perched on the edge of Mto wa Mbu escarpment. Dinner and overnight at Lake Manyara Twiga Campsite

After breakfast, drive to the Serengeti Plains, the most famous of Tanzania’s National Parks. It is most well-known for the annual migration which takes place across the great Savannah plains. Have game drives and you will be able to see leopards, lions, cheetah, and many others. On the following day, spend the entire day game viewing in the Serengeti and with a picnic lunch under an acacia tree.

After lunch, head through the plains, following the Seronera river valley while game viewing heading to Seronera, an area rich with wildlife year round and is set high on the saddle of tree-clad ridge commanding panoramic views over the endlessly rolling reaches and volcanic reefs of the Serengeti. Dinner and overnight at Serengeti Seronera Public Campsite/Serengeti Special Campsite

After breakfast, drive towards Ngorongoro. You will have a stop over at the archaeological site of Olduvai Gorge – “the Cradle of Mankind”. Here, Mary and Louis Leakey found fossilized remains of man’s oldest ancestors. Proceed later to Ngorongoro, arriving at a strategically located lodge, on the rim of the crater with magnificent views. Dinner and overnight at Ngorongoro Simba Public Campsite/Ngorongoro Special Campsite

In the morning, leave very early for a game drive in the crater and explore the Ngorongoro crater which is a home to about 25,000 animals, mostly the big five such as the rhino, elephant, lion, buffalo, leopard plus countless other African mammal species. Later, drive back to Arusha